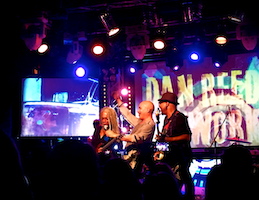 Back in the 90’s when grunge and then nu-metal had killed off all the great rock bands, there were always some of them that I wished could reunite more than others. One of those bands was Dan Reed Network. I had loved that band since their 1987 debut and there was a big musical hole that really couldn’t be filled when they split up / went on hiatus. Sure, Dan Reed himself came back in 2010 with a solo record and has been touring frequently since then, but his solo stuff is more mellow and poppier than the fierce funk rock attack that were Dan Reed Network. Up until 2012, there wasn’t much hope for a Network reunion, there were rumours that the members didn’t really get along, especially Reed and keyboard player Blake Sakamoto seemed to have a beef with each other so when the news got out that the Network were back for a few shows at the end of 2012, I was hoping that they would do a full tour and not just a few gigs back home. That would happen and almost exactly two years ago (2013-10-10) the band stood on the stage in a club, Debaser in Stockholm (reviewed here) and I was as happy as a kid on Christmas Eve. It was the first time I saw the band since they opened up for Rolling Stones back in 1990 (I had seen they as openers for Bon Jovi in 1989 as well) and they blew me – and everyone else, I guess – away. So I had some high hopes for this gig as well. The only downside this evening was the absence of Blake Sakamoto, who have to stop touring because of family issues at home (hmmm….). He is being replaced by one Rob Daiker from Reed’s solo band. Permanently, if I’m not misinformed. But first out tonight was a new band called Locomotive.

Why the band is called Locomotive, I’m not sure of (maybe Loco-Motive would be cooler? Or not.), but what I do know is that they rocked the place really hard. Locomotive are Electric Boys’ guitar player Franco Santunione’s side project and it was really cool to see and hear Franco as the lead guitarist, a task he passed with all the glory. It makes me think that the guy is an unused talent in the Electric Boys where he has to play second fiddle to Conny Bloom, just holding the rhythm spot to Bloom’s leads. The members of the band, except for Santunione and singer Tobias Ågren, felt somewhat anonymous, but as musicians they were brilliant and the music spoke for itself. Their groove was infectious and the influences were all over the place. Kiss, early Alice Cooper, Stevie Wonder, early Whitesnake, The Rolling Stones, funk, soul, pop, blues… A mix like that can turn into a bloody mess if you’re not careful, but these guys turned out to be real pros and they have their own identity that keeps the whole package together and they played an interesting set. I don’t know any of the songs, but every single one was a killer and to check out their – as for now only digitally released – debut album is a must. Great things will come for these guys, mark my words. And remember where you read it first.

But it is when Dan Reed and his Network hit the stage the real action starts. I mean, they are the reason why we are there in the first place. The band kick off the set with “Resurrect” from their self titled 1987 debut and the funky groove and the in-your-face riffing got the crowd going instantly. I have always wanted them to change opener as “Cruise Together”, the song that have opened their sets since 1989, to me feels way too slow and mellow to open shows with. Now, “Resurrect” might not be the fastest track in the world but it sure does its job as a show opener. “Under My Skin” is a riff happy groover from 1989’s Slam that makes it impossible to stand still and “Forgot To Make Her Mine” is one of DRN’s best songs ever and live it grows a new, harder, life – fantastic. Same with “Make It Easy” (Slam), it’s such frantic groover that kicks all the ass in the world live. “Baby Now I” from the criminally underrated The Heat (1991) kicks up a big ass groove and by the response the song got, I think it’s time for DRN to let some more songs from that record rip when the play live. “Rainbow Child” (Slam) may be a ballad, but it’s one of the best power ballads ever written and I’m sure I wasn’t the only one with goosebumps this night. Guitarist Brion James played us a marvelous guitar solo after that song and usually I think those are really boring, but James is an amazing player who plays tasteful with lots of feel and finesse, both in songs and in his own solo spot. One the world’s most underrated guitar players, if you ask me. “Come Back Baby” has a softer groove, but the song is still a must live. Brion James killer riffing is waaaaay heavier live than on record which make even the not so uptempo songs swing like crazy. Tonight, the band sung some strophes of Kiss’ “I Was Made For Lovin’ You” and Metallica’s “Enter Sandman” in the middle of the song, which was a cool mold breaker. “The World Has A Heart Too” (DRN) is funked up rap influenced groover that is more of a sung intro than an actual song, but it’s really cool live as everybody in the audience knows every word from that song and sing along. On the album, it’s the intro to “Get To You”, but here it becomes the intro to “Seven Sisters Road” (Slam). Now, that is a song I have always though was one of the band’s weakest song, but live it is a different beast. It’s in your face and pumping hard beats and the catchy melody is striking. I love that song now. If “Rainbow Child” is one of the best power ballads ever written, then “Stronger Than Steel” (Slam) could very well be THE best power ballad ever written. At least, it feels like that tonight. I have always loved that song and the emotion and passion that comes out of the melodies are majestic. Goosebumps again. Next, Brion James steps up to the mike with only a ukulele and sings “Chill Out” (The Heat) all by himself. Now, “Chill Out” might not be DRN’s best song ever, but in this environment, it works like a charm. And James has damn fine voice as well. Next up, “Cruise Together” (Slam) and its mellower pace and darker feel has always made me feel… uncomfortable, in place of a better word to describe my feelings towards it, but the version made this evening made the song huge and breathtaking. I’m now a fan of that song as well. “Baby Don’t Fade” (DRN) is another pop-funk-hard rock groover with a chorus to die for. To not play this one live is not an option! It also contains a bass solo from Melvin Brennon. Bass solos aren’t the most entertaining happenings in the world, but Brennon sure makes it fun to watch. The guy is a rock, a killer bass player that PLAYS bass and not just keep time. And he swings like a motherf**ker!!! “Ritual” (DRN) is one of those songs that could have – and should have – shipped any album quadruple platinum, but in DRN’s case, it didn’t. Only the Lord knows why because it’s one of the best funked up pop metal numbers written. Well, DRN fans love it and live it’s an ass-kicker deluxe. “Get To You” is DRN’s biggest hit so that the song is a show closer instead of the encore is a bit strange. It make the crowd go nuts, of course and live it’s a heavy funk-rocker opposed to the pop-funker it is as a studio version, but really, how can you follow it?  Well, when it’s time for encore, Dan Reed – most beautifully sings an a’capella version of “All My loving” (Slam). Now, “All My Loving” is, to be honest, a bit dull so this a’capella version does its trick and it totally works. Last song of the evening is “Tiger In A Dress”, DRN’s most mediocre song ever. But it was a really big hit here in Sweden so it must be played. But as an encore? Nah, this is an opener, really. It has the upbeat tempo, the big groove and the power to open up a show. And with that it was goodnight and all that. But before they left, Dan promised us that a new record will be soon recorded and that they will be back to play both Gröna Lund (an amusement park) and Sweden Rock Festival this summer. Hale-fuckin-lujah, baby! This is news I have been waiting for!

So, any criticism then? Well, not really. Maybe the sound had too much treble on it, but that’s about it. Let’s face it, with these musicians and these songs, DRN can’t do no wrong. Not only that, but the band seemed to have the time of their lives onstage. They were laughing, fooling about, making jokes, improvising – almost every song came with at least a little bit of jamming or grooving around a bit – and that shit is contagious, folks. I looked around and everyone around me had – to quote Jani Lane  –  a smile on the face ten miles wide and that’s how you entertain. Drummer Dan Pred must be mentioned as well. A solid drummer and a mighty groover, he is the foundation on what this band leans upon. And the vocals – man, the vocals. Dan Reed has always been a good singer, but with age he has turned great. I don’t remember Dan having this range when he was younger. He impressed the hell out of me. The backing vocals. Dude, this band can sing – and then some. No need for backing tracks here, hun. Here’s the deal, if they play your city or anywhere near, go see them. Otherwise, you’re a fool!