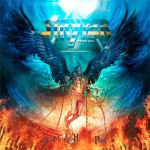 In this day and age, when old 80’s hard rock bands keeps reuniting to the left and to the right, there are two things that I appreciate the most: 1) When the band contains most of the original members. 2) When they don’t just do the nostalgia thing, but keep on releasing new high quality products despite the fact that record sales are ridiculously low. Bands that comes to mind are Winger and Europe and of course Stryper. Since their reunion in 2005, the band has released no less than five albums – that’s more than they did the first time around. Of course that’s a bit sugar-coated truth as two of those five albums don’t contain any new material – well, almost anyway. One was a covers album (The Covering, 2011, contained two original Stryper songs) and one was an album of old songs re-recorded (Second Coming, earlier this year, also with two new songs), but what I’m getting at is that there is a will to move forward and just not touring festivals, living on past glories. Now, most people come to the shows to hear the classics anyway, but you catch my drift. When Stryper released their reunion album Reborn back in 2005 they were criticised by many fans for getting away from the classic Stryper sound and that the album sounded to modern or alternative. While they definitely had a point there, it still wasn’t like Stryper had gone grunge, nu-metal or whatnot, but sure, the album had a new sound. Personally, I thought that album was great.

It took Stryper four years to produce their next album, the tragically underrated Murder By Pride from 2009, but since then Stryper has been one productive unit, releasing albums and touring all over the world, but even though the original four members (Michael Sweet – lead vocals, guitar, Oz Fox – lead guitar, Tim Gaines – bass and Robert Sweet – drums) have been together since 2009 when Gaines replaced his replacement Tracy Ferrie, this is the first album of original new tunes to include the original members since Against The Law (1990). So, this time Stryper (read: Michael Sweet) has made sure that there were no loose ends and decided to give the fans what they have been craving – a classic Stryper album with extra everything. The first two tracks “Revelation” and the title track leads the way and sets a standard for the rest of the album. There’s no doubt that the band has decided to go back to their early roots and leave all the novelties at home with the pop songs and the cheesy ballads. My friends, this is heavy stuff that takes us back to the days of the first two albums, only more classy. “Saved By Love” is fantastic – metal all the way with marked influences from Judas Priest and early Iron Maiden, “The One” is a ballad, but fear not, this has none of the cheese that you’d might expect from Stryper, no, this is a powerful ballad – and maybe their best ballad to date, with “Legacy” they takes us back to the metal and “Marching Into Battle” is just brilliant – heavy, dark, apocalyptic, with a hook. “Sticks And Stones” is the closest thing to a hit tune here, reminiscent of the structure that “All For One” from Against The Law had – heavy, yet very catchy.

“Water Into Wine” is another killer piece that has one foot in the 70’s and the other in the 80’s that stands on a heavy foundation and the finishing track “Renewed” is heavy metal of the 80’s done Stryper way – brilliant! No bad songs on here, then? Well, no, not really, but I must admit that I’m not that hooked on “Jesus Is Just Alright”, a Doobie Brothers cover in all it’s cheesiness. I’m sorry, but when I get religion thrown in my face like this, I tend to become a bit obstinate, but mostly it’s because I’m not that fond of the song itself, message or not. Otherwise this album is flawless and even though I’m fully aware of what a band like Stryper are able to achieve, I’m pleasantly surprised by how magnificent this album really is. Not only are all the songs great, the production is really spot on as well. It’s really in your face, razor-sharp and edgy, but still clean and warm. Stryper hasn’t just gone back to their roots, it’s more like they have reinvented them. It’s impossible by listening to this album to guess that this music is made by a men in their late forties / early fifties. I think of this of this as a heavier To Hell With The Devil minus the cheesy ballads and the pop songs and frankly, more even. Also, the artwork looks like an updated To Hell With The Devil. This album is so damn good that I’m gonna stick my chin out here and proclaim this album Stryper’s best so far. Everyone out there who isn’t pretentious and who likes to listen to music with an open mind (I know for a fact that there are rockers out there that refuse to listen to Stryper simply because of their beliefs. How lame!) and are into hard rock and metal, should check this one out. This album will be on my Top 10 list of 2013, make no mistake.

2 comments on “STRYPER – No More Hell To Pay”