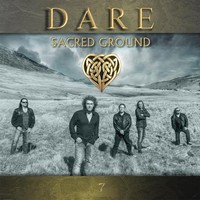 I sat down in front of my TV some day back in 1988 to watch some of the hard rock / metal shows that was on the satellite TV shows back then. In 1988, cable wasn’t that usual in Sweden and the place I lived in was pretty early in getting it. I can’t remember if it was on Super Channel or Sky Channel but I never ever missed out on any of the shows that played hard rock and metal videos. Since the more melodic rock and AOR sounding music was huge back in ’88, many of the bands that were being played were in that vein, much to my happiness since I totally adored that kind of music back then (I still love that kind of music but my taste has grown much broader with age). One of the tracks on that show was the debut single from this new band Dare – “Abandon” – that had just been released and the female VJ said “…and girls, check out the lead singer, he’s really something else….”. The song came on and it was just jaw dropping. Little did I know when I saw that video was that the hunky lead singer was no one else than former Thin Lizzy keyboard player Darren Wharton. I was – and still is – a huge Thin Lizzy fan, but I had never paid much attention to Wharton before and since I didn’t even know he had formed a new band, it never dawned on me that this was the Lizzy guy – the female VJ never mentioned it either which is kind of strange. What I did know was that I had to have that album, called Out Of The Silence, and I made sure that that happened the next day or so. To me, Out Of The Silence is an AOR classic and I had the pleasure to see Dare open up for Europe on their Out Of This World tour in 1988, a concert that I still hold as one of my favorite concerts ever. But Dare never managed to top that record and the fact is, they have never even been close to do that.

But that doesn’t mean that Dare has released a bunch of crap albums to follow that up – they have never been close to that either. The follow-up, Blood From Stone from 1991 was a really good album and was, when it comes to the melodies, very much a true Dare record. But instead of producing yet another great AOR record, the band had sold out and followed the trends and released a heavy hard rock album that sometimes even bordered to metal – for a band like Dare a stunt like that couldn’t be more wrong. Since then Dare has released five more records if you count the re-recording of their third record Calm Before The Storm from 1998. While none of those records have been bad, they were all a bit too soft, filled with ballads and Celtic sounding pop songs, all in the same style and at many times the songs have just grown together so much that it’s hard to tell them apart.  Dare did also cover old Lizzy tracks such as “Still In Love With You” and “Emerald” and on their last album Arc Of The Dawn (2009) the band recorded new versions of the Out Of The Silence tracks “King Of Spades” and “I Will Return”.  Apart from the release of Calm Before The Storm 2 in 2012, there hasn’t been any new releases from the band since 2009 – which means it’s been seven years since we got a new album from the band. When reading some between the lines in interviews with Wharton and the return of guitarist Vinny Burns (ex- Ten) who played on the first two albums, I was certainly hoping that Wharton had steered Dare in the direction of their debut album for their new effort, released on July 11.

Opener “Home” starts out as a ballad, just like so many other of their later songs, but it speeds up without ever being a fast track. The electric guitar is a bit higher in the mix compared to the sound Dare has had for the last 20 years which really bodes well. The Celtic feel is present but not as obvious as we’re used to. The melodies are still very Wharton recognizable and the song do have sticky chorus – this is very good indeed. “I’ll Hear You Pray” is even better. With this one the band has really gone back to their AOR roots and the song is obviously inspired by the way Darren wrote for Out Of The Silence. Again, the electric guitar is at front opposed to their more acoustic guitar driven years. The ballad “Strength” that follows is a real winner as well. The mix of the Out Of The Silence sound and their Celtic style is really spot on. Also, Vinny Burns’ guitar solo is nothing short of glistening here. “Every Time We Say Goodbye” is another ballad and a very AOR one. It’s not so much a nod back to Out Of The Silence but more of a standard AOR ballad (meant in a good way) with a big Dare feel on it. Another great track. “Days Of Summer” manages to sound like a typical summer tune while being written and played mostly in minor which gives it a darker feel. The pace is uptempo and the AOR gene takes over much of the song and the Out Of The Silence vibe is really pivotal for the song. “On My Own” is based on acoustic guitars and comes on like a faster kind of ballad and this is probably the most pure AOR sounding track this band has released in ages. It’s a magnificent song and the fact that they do this stuff so well makes me even more convinced that AOR is the right way for Dare to go. “Until” takes on a more Celtic route but not quite in the vein of the last few albums. This one bears more resemblance to a song like “The Raindance” without it sounding anything like it, it’s more the feel I’m getting at – and yes, it’s a damn fine song. “All Our Brass Was Gold”  has a great melody that moves towards AOR but is in reality more of a Celtic pop song in vein of a ballad – and it’s a really good one. “You Carried Me” reminds somewhat of “King Of Spades” in its arrangement and the bridge is waved together with the short chorus which makes it hard to tell where the bridge ends and the chorus starts. I like that. It has a strong melody that sticks instantly. “Like The First Time” is a great pop / AOR tune that rocks in a more uptempo pace which suits them very well. The chorus is also very catchy and sticks on the spot. “Along The Heather” brings on a Scottish vibe, but its foundation is actually ordinary AOR where Wharton’s strong and recognizable melodies saves the track. Still, those melodies are so strong that the song gets thumbs up anyway.

On the whole this is damn fine record – in my book, the best one Dare have released since their debut. There are no bad songs on it at all, fact is almost all the songs are superb. But there is a down side to it, not a big one, but still a down side – the songs sounds too much alike. One by one, all the songs are bloody amazing but listening to the album back to back, it can be somewhat hard to remember which title is which – a problem Dare have had since album number three. On the two first albums the songs are varied and I have no problem telling which song is which after only a second or so. But since the quality on a Dare record hasn’t been so high since their debut, this album is the Dare album I have been waiting for and in my mind, this one is the natural follow-up to the debut. Also, when I hear the news that Dare are about to re-record Out Of The Silence (business related reasons mostly), I get the feeling that Wharton and Burns wants to go back to their AOR roots which brings hope that the next album, that Dare will start to work on soon, will be even more in the vein of their brilliant debut. Until then, this album should do just fine for fans of both their AOR days and their more Celtic years. Well done!