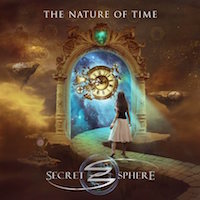 The first time I ever heard of Secret Sphere was when I was reading an article about Whitesnake, if my memory serves me right. Secret Sphere’s lead singer Michele Luppi is also the keyboard player in Whitesnake, see. I can’t say that I was overwhelmed by that information at all – and even less when it stood clear that this Italian five-piece plays some kind of power metal. Not my kind of metal, so to speak. But last year a streaming link of Secret Sphere’s then brand new live album One Night In Tokyo ended up in my mailbox. Now, I never reviewed that album because I just didn’t have the time  – and maybe that was just as well because I can’t say that I was overly impressed by the album. I had a few reasons for why that was but the biggest reason was that I just didn’t like the songs. I didn’t hate it, but nothing stuck and that was that. Kind of. Well, now it’s time for Secret Sphere to release another studio album – their 8th since their debut in 1999 but only their second with Luppi as the singer (the third if you count the re-recording of their second album A Time Never Come (2001) that was released in 2015) who joined the band in 2012. And the reason for this review is – another download link. So despite the live album that never caught on with me, I will do my best to listen to this record with an open mind.

The album is divided into four chapters which means that this is some kind of concept album and as well all know, those albums go either way – masterpiece or catastrophe. The first chapter, called “Genesis”, starts with an intro called “Intermission” and it’s there to build up some kind of atmosphere. First real track “The Calling” is a symphonic and somewhat progressive pop-metal track that sounds less power metal than I had expected. The tempo is mid pace and it has a catchy melody that works its way into the brain all along the way. Good without being remarkable. The ballad “Love” follows, where the main melody sticks right away and the progressive touch takes the tune past standard power balladry – very good.

The next chapter, called “The Seven Virtues”, starts with “Courage”, a tune that mixes power metal with a good dose of pop metal. It comes with a harder edge than the previous songs and its chorus brings some catchiness, but the song does nothing for me at all – I find it forgettable. “Kindness” is a softer, more ballad-like song with clear progressive undertones. The arrangement is gorgeous and the pop laden melodies really sticks. Best song so far. “Honesty” brings up the roughness again and this is a hard rocker with a metal vibe, but it also comes with a softer melody. It is somewhat symphonic with a twist of pop but we also get a good chunk of metal riffing which brings heaviness to the table – a really good song with lots of influences baked in. “Faith” is more in the metal vein even though the big chorus brings out the pop and while the song do bring its fair share of power metal, I can also hear a Dream Theater influence in there. But I have a hard time getting into the song and for me it never really click. “Reliance” on the other takes a turn for the more fast, heavy and aggressive parts. There’s prog in there but also with symphonic and even gothic elements. That should be exciting but again, the song never takes a hold of me and even though it’s not bad, it soon fades from my memory. “Commitment” is an instrumental number that starts out with some heavy riffing and big progressive and classical elements. Still, it’s catchy enough and I must say I really like it.

The previous tune takes us into the next one, the first track in Chapter three, “The New Dawn”, called “The Awakening”. It’s an epic 9-minute track that starts out with some big orchestral arrangements which makes it almost operatic, But the tune soon breaks into a groovy, symphonic metal piece with a striking chorus that sticks right away. The song also contains a power metal vibe but the songs so good that I don’t mind at all. The song ends on softer note that contains a spoken word. It’s the album’s champion for me. It’s also the only song in chapter three which takes us right into the final chapter called “The Way”, which also only contains one song, the closing “The New Beginning”. It’s a ballad, very soft and keyboard laden with the guitars more in the background. The beautiful melody builds up an atmosphere that makes the song come across as very emotional – a very good closer indeed.

I must admit that the first time I heard this album, I didn’t like it at all but it grew some notches by second spin. It’s not a masterpiece by any means, not even close but it’s definitely not a bad album. What bothers me most here is the production more than the songs’ quality. In my stereo at home it sounded horrible but in my head phones it sounded way better. The problem with the production is that the whole mix sounds “held back”, a bit thin and way too compressed, it just don’t breathe enough. And where’s the punch in the drums? Where’s the attack in the guitar? Why is the bass so laid back? And why does it feel like the lead vocals are sky-high in the mix? That way the other instruments takes a background position and the whole bombastic and orchestral pomp and dynamics gets lost. This is a pity, because the musicians here are very talented and there are some damn good tracks here. What I do like with this album is that it’s not nearly as power metal oriented as I thought it would be. Secret Sphere has gone for a more progressive and symphonic sound which is to my liking. It’s an ok album with lots of potential that doesn’t cut it all the way.