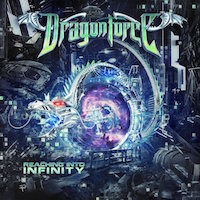 Like so many other people, I first became acquainted with Dragonforce via the video game Guitar Hero which featured their song “Through Fire And Flames” from their third album Inhuman Rampage from 2006, something that turned out pretty weird when I found a burnt disc of their second album, 2004’s Sonic Firestorm. Some friend of mine had probably provided me with a burnt copy that I completely forgot about. I tried to play to “Through Fire And Flames” but gave up within 30 seconds and I never tried it again. Too fast, man. Too fast. To say that I became a fan through that song must be the overstatement of the year but I did try to work my way through Sonic Firestorm when I found it at home but even though I didn’t hate it, I really couldn’t cope with it either. Power metal was never my thing and to listen to seven minutes songs with guitars so fast they make Yngwie Malmsteen sound like a slow bluesman in comparison and drums running amok all over the place just gets the best of me – I admit that the album only made me nervous and I never really enjoyed it – even though I tried to listen to ita whole bunch of times. Apart from that album, I have only heard the odd song here and there and it safe to say that I have never been a fan.

Dragonforce were formed in Great Britain in 1999 by guitarists Herman Li and Sam Totman, vocalist ZP Theart, bass player Steve Scott, drummer Matej Setinc and keyboardist Steve Williams, but today only Herman and Sam remains from the original line-up. ZP Theart is now the new lead singer in Skid Row – he replaced the short-lived Tony Harnell (TNT) who replaced Johnny Solinger. Today’s line-up  features singer Marc Hudson, bassist Frédéric Leclercq, drummer Gee Anzalone and keyboardist Vadim Pruzhanov. The band released their debut album Valley Of The Damned in 2003 and have since then released six more albums including the new one. So when their brand new album came crashing into my letter box – yes an actual CD!!! – I decided that it would be stupid not at least give it a real fair shot and listen to it carefully with an open mind so here’s the outcome.

After the album opened with its title track as the instrumental intro, the whole she-bang kicks off with “Ashes Of The Dawn”, a tune that sure is Dragonforce approved – it’s fast, hard and with the drums going off a 200 mph, but the melody shines through and the chorus is actually very catchy and sing-along ish. I actually dig it. “Judgement Day” starts out with a big, pompous keyboard intro before it blasts away, raging like a wounded bear with ADHD at ultra-speed. The main melody is pretty catchy but it is when they slow things down I get an idea of just how good this song could have been. It’s not bad but it kinda gets under my skin a bit. Speed wise, “Astral Empire” totally runs amok and it sounds like a bullet train chasing you while you’re running on the tracks. The melody is ok but it is when they slow down in the middle break and the bass line gets almost funky that the melody comes across best and again, this is where Dragonforce shows what a melodic force they really are.

It’s the same with “Curse Of Darkness” – the beginning and the middle part goes in a slower pace and those parts are brilliant where the melody catches on like crazy and I’m enjoying that lots. There’s also an acoustic middle break that is absolutely adorable. But for most of the song, it’s speed, speed and more speed and I guess that’s just not my can of beer. I don’t hate it but it makes me kind of uncomfortable. So thanks a lot for “Silence”. It’s a semi-power ballad, very bombastic and epic where Hudson totally kills vocally. The arrangement is very atmospheric and the song just sweeps me away – what a winner! “Midnight Madness” burst out like wounded elephant shoveling down the forest and the drums are going berserk and literary makes me gasp for air. On top of that lies a very melodic main melody that is really catchy which more or less saves this track – very catchy indeed.

“WAR!” is ultra-fast, hard and aggressive and it actually goes into thrash metal territory, dark and menacing and the roaring and almost growly vocals makes this track a stand-out tune here – the album’s sore thumb, if you will. It still nurses a melody in the chorus that is Dragonforce all the way but everything marries brilliantly and it is by far my favorite tune on the album. “Land Of Shattered Dreams” is a regular metal / hard rock song when the drums aren’t going off at the speed of light and when the chorus also is catchy as hell, the song comes out at its best – a very good tune. The epic 10-minute track “The Edge Of The World” kicks off in a slower pace and it also contains a slow and soft middle break that brings out the dynamics more and when you expect it the least, all Hell breaks loose where the lead vocals goes off into screams and growls. It’s a heavy piece where the melody is in focus and the refrain is just amazingly good – a very diverse and varied song – great tune. Closing number “Our Final Stand” is a fast metal track but not fast to the extremes. It alternates between mid-tempo to a faster pace, but never to the point where my head starts to spin. Again, the melodies are all sticky enough and the chorus is really good.

As a whole, I liked this album more than I thought I should. But that said, I’m just not comfortable with the super speedy drums and the razor-sharp flashing guitar solos that runs riot like a runaway train in 200 mph. I know that this is much of what Dragonforce are all about and they have their fair share of dedicated fans who probably don’t want anything else but to me, Dragonforce comes across best when they slow things down and concentrates on melodies and groove instead. I mean, they are all highly skilled musicians, super-talented and all and I love that – and the singer is awesome but it just doesn’t matter when I get a feeling of restlessness and nervousness as soon as the raging speed hits me. They do have some good songs and their fans will probably love it but it only works for me partly.