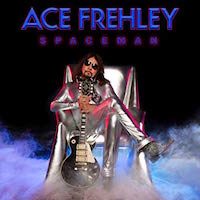 Ace is back and he told you so! And since he left Kiss for the last (?) time back in 2001 to get sober once and for all and to get the second coming of his solo career off the ground, it sure seems like good ole Ace really is back because in later years he really has proven to be one creative dude. His first album since Trouble Walkin’ (1989), Anomaly (2009) turned out to be a bit on the uneven side but it was good enough and showed us that he meant business this time. Today, Ace has been sober for almost 12 years and at the age of 67, Ace feels more creative than ever before. 2014’s Space Invader proved that Ace had a lot left to give, a brilliant album that nailed everything that is Ace Frehley and in my book his best effort since awesome as his 1978 solo debut. Hell, the guy even managed to record a great cover album, something that’s pretty unusual. With his life in order and his career back on track, it’s time for Ace to prove that his last album wasn’t just a lucky shot and that he’s relevant in 2018 with a brand new album.

Opener “Without You I’m Nothing” is co-written by Gene Simmons and he also handles bass duties on it, something that’s easy to spot as the tune is built on Simmons’ heavy, bouncy bass riff. It’s a Classic Rock, typical Ace-track with its feet in the 70’s with a meaty riff and an electrifying guitar solo from the spaceman. It’s a great tune with a raunchy refrain that screams Ace Frehley. The whole tune makes me wish for another Kiss reunion with a new record in tow. Latest single “Rockin’ With The Boys” just oozes of 70’s Kiss and the tune wouldn’t have made a fool of itself on an album like Love Gun (1977) or his ’78 solo debut. A groovy stomper with a killer refrain that Ace wrote back in the 70’s where Ace’s Pop vein appears – great.

The second Simmons co-write (but without any bass playing) is “Your Wish Is My Command”, a title Simmons have been throwing around for years now. Knowing that Gene co-wrote it, it’s not hard to hear his input here but this rowdy stomper really holds all the classic Ace elements and once more, the ’78 solo album rears its head. Earthy and cocksure, the tune holds a memorable refrain and a steady groove. Very good. First single – and also the name of the E.P. that preceded this album – “Bronx Boy” is Ace revisiting his past and the tune is a short, ballsy tune with its feet grounded. The rhythm brings on an intense live feel and cranky riffs that fires on all cylinders. Fat, catchy and in-your-face – great stuff!

“Pursuit Of Rock ‘n’ Roll” is a rewrite of an old tune, originally written for Psycho Circus (1998) and why this beefy, chunky hard rocker didn’t end up there is anybody’s guess. It’s a chunky piece and Ace’s ode to Rock music and he even name-drops Elvis Presley and Chuck Berry in it. A hooky, groovy rocker with a splendid live feel all over the track and a chorus that really hits off. With every Ace album there’s always a cover present and for some reason, Ace always go for a Pop song when it’s cover time. “New York Groove”, “Do Ya”, “Fox On The Run”, “The Joker” – all Aced up Pop songs. This album’s cover, Eddie Money’s “I Wanna Go Back” is no exception. It’s smoother and more hit-friendly than the rest but it still takes on an Ace character. The tune is a swinging and shaking pop-rocker with a Melodic Rock laden chorus that’s so catchy it’s ridiculous. I have never heard the original so I’m not sure if Ace bettered it or not, but it’s a killer tune and a must-be future single!

“Mission To Mars” is a more edgy hard-rocker that comes in a faster pace, riff-happy, bouncy and heavy the way we know and love our planet Jendell refugee. It’s a good album track but the refrain won’t lift – a good but not great tune. The mid-paced, bouncy grooved “Off My Back” is my least favorite song on the album. It’s a bit on the monotone side and it never really goes off. Monotone doesn’t necessarily means bad, I mean “Ozone” is monotone and a great tune, but this one comes across as a bit forgettable. As always, Ace closes the album with an instrumental. “Quantum Flux” is another one in the “Fractured” series which all is based on his “Fractured Mirror” masterpiece. However, this one’s a bit more progressive and electric based whereas most of them are based on acoustic guitar. It’s a great tune without coming close to “Fractured Mirror”. That said, “Quantum Flux” is Ace’s best instrumental since said masterpiece.

It’s forty years since Ace’s debut solo album and the fact is, the original title for this record was 40 Years Later, so it’s no coincidence that that album is the template for this one – nine songs that ends with a six and a half minute long instrumental. I know for sure that this album will get a mixed reception, all of his solo album has, but I think he’s done a great album that proves that Ace is way more relevant in 2018 than his old band. He still makes records because he’s creative and he makes great ones – and I believe that the days of releasing half-assed junk like Second Sighting (1988) are over. It’s not as brilliant as Space Invader but it holds up very well, it sounds fresh, vital, passionate and alive. I know that when it comes to playing his axe, Ace can be somewhat nonchalant live but just like on his two latest efforts, he’s on fire. Oh yes, Ace IS back and he bloody told us so!