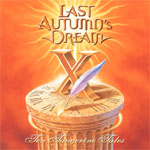 Just like there is a World Championship in ice hockey with only decent players every once a year, there is also a new album with Swedish foursome (well, ok guitar player Andy Malecek (Fair Warning) is German) Last Autumn’s Dream. However, there is nothing only decent with their albums – they are usually very good. I have known about the band since their self titled debut in 2003, but it wasn’t until album # 8, Yes, from 2010 that I became a real fan, as I always found their previous albums a bit too uneven. The new album, their 10th, is called Ten Tangerine Tales, and with this one I really got what I asked for. When I reviewed their last album, Nine Lives (2011) I thought it was a really good album, but a bit too safe. I wanted to hear the guitars higher in the mix. I wanted the overall sound to be much tougher. I wanted more balls. It only took one listen to this album to realise that I got all of that. Yes, I know that Last Autumn’s Dream is an AOR band that sometimes rambles on the edge of west coast rock, but the heavier beat sure fits the boys like a glove.

The album starts with the title track, which is just an instrumental intro that breaks in to the album’s real opening track, “Pickin’ Up The Pieces” – a classic Last Autumn’s Dream stomper, only with bigger guitars. “2nd Look” must be a single at some point as it is a true hit. It is also one of the rockier tracks they have recorded – catchy as hell with the guitars right up in your face. With “For You” they go back to their more poppier moments, but it’s still a great pop tune, “The Man I Used To Be” is LAD as we know them – brilliant AOR with extra catchiness and “I Will See You Thru” is a killer hard pop song. Really nice to add the riff for Sweet’s “Turn It Down” at the end of the song too. And speaking of Sweet, if you get the Japanese version of the album – and you should, you will get a cover of The Sweet’s “Rebel Rouser” (Sweet Fanny Adams, 1974) as a bonus. And even tough it’s true to the original, this is a very good cover. The ballad “When I Found You” has the same problem that some of the other LAD-ballads have – it’s decent, but too cheesy. On the other hand, the album’s closer, “My Final Love Song” is proof of how you write a fabulous power ballad. “Lie To My Heart” is another song that really needs to be mentioned here as it is ultra catchy with some wonderful melodies and I’m thinking hit song here as well.

So where their previous album wasn’t as strong as its predecessor, it’s really nice to say that with this one, they have released their finest hour so far. The heavier production serves the band real well and singer Mikael Erlandsson’s voice comes across, if not better, then in a different way. I’d say better, though. But they still sound like Last Autumn’s Dream so there is no need for worries, if you’re a LAD-fan. Now, with a new album that feels more fresh and sounds more alive and kicking, I think it’s about time for the boys (which still includes songwriter and drummer Jamie Borger (Treat, Talisman) and Nalley Påhlsson (Therion)) to start playing live. Even though their music may lie on the softer side of hard rock, it’s catchy and groovy enough to be perfect for a live environment. Hopefully, 2013 is the year it’s gonna happen.