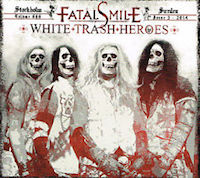 This might just be the most weird review I have ever written. If you haven’t heard what has happened to Fatal Smile recently, then here you go. The band had just come off their most successful – and easily their best – album of their career, 2012’s 21st Century Freaks. They were just about to release their follow up, a real important one and embark on a 32 days long tour to support it when the shit hit the fan. After just one gig, guitar player and band leader Mr Y, simply walks out of the band and takes the first plane home, leaving a press release, saying that the band is over while the rest of the band, singer Blade, bassist Alx and new drummer Snake are left behind in the dark. How’s that for a bitch move, huh? So when this album hits the shelves, Fatal Smile is no more, kaput, finito. How do you promote a new album when the guy who really owns the band has just pulled down his pants and took a huge crap all over the band’s name and its members – members who probably thought they were his friends? With friends like that, you really don’t need enemies! The whole thing is a big shock as I – and I guess everyone else – got the impression that these guys were really good friends and not just band members. So sad. Still, the album is out and I’m curious if the guys could top their last album. See, I was never really a fan of this band and I only got into them with their last album so this is the first time I look at a new Fatal Smile album with any anticipation at all. But what I know now, that I didn’t know before their last CD, is that no matter if you like them or not, they are a bunch of fine musicians who really knows how to work their instruments and as a live band, Fatal Smile are – or were – a world-class act.

The album starts out with a big bang – the title track. It’s a bombastic and hard metal track with a heavy groove, but still catchy enough to keep the melody intact in your brain and it shows that the last album wasn’t just a fluke.  First single and video “Like A Rockstar” might be a bit on the daft side lyrically, but hey, this is entertainment and the song is a killer with a contagious refrain and an almost southern rock groove. “Dirty Little Secret” is also single material. The chorus is big and the song lies on a foundation of metal – this is great stuff. “Alive And Kicking” is a fat hard rocker with a big punch and “Down And Out” is a classic pounding heavy metal track and I really dig them both. One of the best songs on this album – if not the best – is “Reflections Of The Past”, a very catchy rocker with a huge hit feel and I wish they would write more of these songs, because Fatal Smile has one issue – they are a little poor on the nuances and they have a tendency to make too many of their songs sound too alike. On their last album, they had more of the pop influenced rockers and those suits the band so well. Still, they know their metal so a song like “Gave It All”, a fists in the air kind of metal song, works really well and a song like finishing “Hip M.F.” is just brilliant, very catchy while on a metal groove. Again, I’m really pleased to state that Fatal Smile has released a really good album although they do it on a this sad note that the band is a goner. Compared to their last album, this doesn’t go all the way because there a couple of fillers that has sneaked their way into the album and they still have a problem with the production that is quite messy and leaves out the nuances I consider important, they lose some of the catchiness that way and no matter which kind of music I listen to, I need catchiness. Still, this is very good album and there are no bad songs on here so there’s really no reason to not get yourself a copy. Oh, let’s not forget, the rest of the band will continue to play with a new guitarist under the name of White Trash Heroes. Stay tuned and put your support there from now on. Goodbye Fatal Smile, it was nice knowing you and welcome to the world White Trash Heroes!