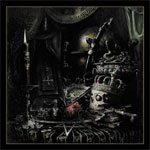 Maybe it’s not accurate to put this lot in the Metal category. Sure, they are Metal, but the word Metal feels a bit lightweight for Sweden’s most evil bunch. Maybe I should make an Extreme Metal category to put this review in. Problem is, that category wouldn’t exactly become crowded anytime soon! So it feels like a bit of an overkill. I mean, these guys are Black Metal and Black Metal isn’t exactly my first choice of music. Yes, I also dig Dimmu Borgir, but that’s about it. So why even bother to review a Black Metal band if I’m not into it, you might ask. Well, see, as I have grown older (yes, older – not old!) the more my musical blinders have come off. When I was a youngster, music was much more about liking this and hating that and I have always been a melodic rock fan. In my twenties, the hardest stuff I listened to was Judas Priest and Iron Maiden. Even Metallica was too hard. Slayer? I thought they sounded more like a lawnmower running riot than a rock band. But things change and for the last 15 years or so I have been listening to music with an open mind and heart and therefore my musical taste has become way broader, both ways. So now I appreciate stuff like Frank Sinatra and Nat King Cole as well as Slayer and Dimmu Borgir. (I actually managed to mention both Sinatra and Cole in a Black Metal review – how about that?). Still, Black Metal and Death Metal are two genres I have a really hard time getting into and most of the acts just don’t have an effect on me – it’s just noise to my ears.

But Watain is a different beast (pun could be intended if you want). The first time I heard about this band was when I read an article about them in Sweden’s biggest and best mag, Sweden Rock Magazine and they were posing with the usual Black Metal paraphernalia, inverted crosses, pentagram and drenched in shitloads of blood, fake I assumed. Thing is, I thought they were so lame and stereotypical that I couldn’t be bothered with them then. But again, things changed. The more they appeared in the spotlight, the bigger they got and it didn’t take long before I realised that these guys were the real deal. And the blood wasn’t fake at all – it was real blood from animals and not only that, it was also rotten. Now, I’m not into Satanism at all – I’m not a Christian either, but I can still listen to Stryper – but the fact that Watain have always stuck to their thing and are honest and true to their beliefs makes me respect them even though I don’t share their beliefs. So when they were promoting their then latest album Lawless Darkness (2010) they gave away the single “Reaping Death” to the subscribers of SRM and I thought I could at least give it a listen when it came free, knowing that I would probably hate it. I couldn’t have been more wrong because much to my surprise, the damn song blew me the hell away. The song was brutal, dark and evil, but still with some catchy melodies and riffs. I checked out the album, I loved it and I decided to check out their earlier albums as well. I really, really dig Sworn To The Dark (2007), but the earlier two albums is a bit too non-melodic for me. Yet, anyway. Maybe I need to give them some more listens.

So for the first time in my life, I have been looking forward to a Black Metal release and when it comes to Watain, expectations are high – and then some. But for some reason, I was never worried with this album. Watain has proved to be a gang that likes to move forward and refuses to stagnate and when I read the prior info on the album, I was sure that moving forward was exactly what they have been doing this time as well. Of course, that’s no guarantee for that the songs will be killers, but knowing the high quality of their earlier stuff, I couldn’t imagine them recording a bad album.

And, of course, they haven’t – not even close. The fact is, this is a brilliant album and in my book, their best to date. The album opens with “Night Vision”, a long intro that is more of an actual song, that sets the standard for the album – very effective. “De Profundis” takes us right back to the dark alleys of Black Metal with its furious and aggressive edgy propelling sound, but not without melodies – and I love it. “Black Flame March” is heavy, brutal and evil, but somehow melodic, “All That May Bleed” is the first single and the album’s only predictable song – not in a bad way, but it is very catchy and very contagious and very much single material and therefore predictable as a single choice and “The Child Must Die” is even more catchier and melodic, so much that it becomes unpredictable. Very cool stuff, but I wonder how much shit they will eat from, as singer and guitarist Erik Danielsson called them, Black Metal Talibans, who will hate it for its melodic structure. Like Watain gives a shit! Also, speaking of Danielsson, isn’t it very cool that they use their real names instead of the stereotype Black Metal names all the others use? Anyway, let’s move on. One of the most talked about songs on the album is “They Rode On” – a  Black Metal ballad! Well, as close to a ballad you will ever get from these guys, anyway. It’s slow, it’s dark, it’s moody and it has – for the first time – clean vocals. And a guest appearance from female singer Anna Norberg. Very cool song with a very dark and unpleasant atmosphere. They will take some crap for this one as well. The title track must be one this album’s finest moments. It’s heavy, dark, evil and hypnotic, also with clean vocals and lots of melody. It also has an acoustic middle section – pure brilliance!

“Outlaw” is very aggressive and heavy, but with some killer hooks and the finishing “Holocaust Dawn” is just brilliant mayhem that leaves us pretty run over and at least I got the feeling of something supernatural and dark that’s resting over this album. But make one thing really clear, no matter how melodic or catchy this might sound, they never ever becomes commercial or cheesy. The production is raw, the riffs are sharp as knives and the drums beats you up bad. This is still brutal stuff, only with a bit more nuances. I love this album, I think it’s even better than Lawless Darkness. This is the best Black Metal record I have ever heard. I’m not counting Mercyful Fate’s Don’t Break The Oath as Black Metal anymore, though. But bear in mind, I’m not a Black Metal fan, so if you are, you might disagree. But to me it’s not about the genre, it’s about if you can write great songs or not. Watain writes great songs. Simple as that!

2 comments on “WATAIN – The Wild Hunt”