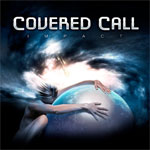 “A covered call is a financial market transaction in which the seller of call options owns the corresponding amount of the underlying instrument, such as shares of a stock or other securities. If a trader buys the underlying instrument at the same time the trader sells the call, the strategy is often called a “buy-write” strategy. In equilibrium, the strategy has the same payoffs as writing a put option”. I know this because this is what it says on Wikipedia. I wrote it here because someone out there might wonder what a covered call is. I know I did before I looked it up. Also, when the band Covered Call started in 2009 it was rumored that the guys, drummer Ronny Svanströmer, guitarists Joel Carlsson and Morgan Rosenquist with bass player Thomas Thulin, were a bunch of hard rock loving stockbrokers turned musicians. How true that is has never been confirmed nor denied. However, the band did sign a record deal pretty fast, recruited singer Thomas Vikström (Therion, Candlemass, Talk Of The Town) and released their debut album Money Never Sleeps, with another nod at Wall Street in that title. The album was surprisingly good, full of catchy melodic rock / AOR and a killer cover of Richie Kotzen’s “Shine”. Although, a shaky gig at Sweden Rock Festival showed that the band wasn’t too experienced when it came to playing live. After that they just disappeared and I thought they would be just another one of those one album bands. So, when I news came out of the blue that the band was about to release a new album, it came as a big surprise.

This time, Vikström wasn’t available so the lead vocal job went to another Swedish giant, Göran Edman who now fronts Swedish prog band Mårran, but has a long past with such acts as Madison, John Norum, Yngwie Malmsteen, Kharma and Vindictiv. Also bass player Thulin left the band and was replaced by Andy Loos (Glory, Lion’s Share). If their debut was a good effort, then this one sounds way more professional. The overall sounds is bigger and more mature and Lars Chriss (Lion’s Share) has done a great job mixing this. The sound is AOR with a melodic rock twist, but the material is stronger this time. “Lorraine” is a magnificent opener with a striking chorus, “Hold On” is a real killer and AOR at its best with a guitar playing helping hand from Chriss and “Nothing Lasts Forever” and “Wake Up” are both brilliantly catchy. By going a bit more rock ‘n’ roll, the guys breaks the mold a bit with “Live It Up” and in closing track “Last Goodbye” I’m hearing both Beatles and Cheap Trick – very catchy, very good.

Of course, Edman does a stunning job, as usual, giving the album one extra push and just like Vikström on their debut, he is probably the guy who their label hope will sell this album. But fact is, the songs and production are good enough to sell itself – this is quality music all the way through. Well, some songs might be considered fillers, but for the most part, this album should satisfy every melodic rock / AOR fan out there.