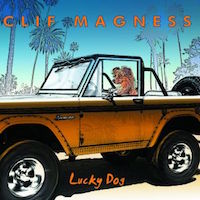 Ok, here’s a dude I have very little knowledge of. Well, I have seen his name pop up here and there during the years, as a song-writer. The last time I saw his name was on Robin Beck’s new album Love Is Coming (2018) as a song writer and producer but I really have no clue of who the guy is. Apparently the guy’s got a Grammy award for best instrumental arrangement accompanying vocal for a song called “The Places You Find Love” together with Glen Ballard and Quincy Jones and Jerry Hey, performed by Chaka Khan and Siedah Garrett. Other than that he has worked with artists such as Avril Lavigne, Kelly Clarkson, Amy Grant, Steve Perry, Hanson, Jessica Simpson, Joe Bonamassa, Barbara Streisand, Sheena Easton, Al Jarreau and Julio Iglesias. Quite a motley crew, in other words and for me personally, not many of them are anything I have any interest in. And in 1994 he released his, prior to this, only solo album called Solo. But since I dug Beck’s new record and the guy is on Frontiers records, I thought that this is some kind of Rock album, I thought it might be interesting to find out how Magness sounds on his own in 2018

Opener and first single “Ain’t No Way” is actually quite a shocker. Here I thought we would be treated with slick, pink n’ fluffy AOR / West Coast Rock but instead a pretty touch and raunchy guitar attacks me. It’s an uptempo rocker with a fat rhythm and a kicking beat and the tune sure damn rocks! Of course, it’s melodic, very much Arena Rock and the refrain is catchy as hell and with shitloads of hooks but without being too radio-friendly. The tune is a real killer – how bloody awesome! Also upbeat is “Don’t Look Now”, a pretty punchy AOR-rocker not a far cry from Bryan Adams back when he was awesome. Smooth melodies walk hand in hand with crunchy guitars and a steady beat – and a chorus so catchy it hurts. Jon Bon Jovi would give his right nut to write a song like this today.

Already as song #3 comes the first power ballad, “Unbroken”. Yes, the melodies are on the saccharine side and the chorus is shamelessly smooth but at the same time, he’s very munificent with guitars and the beat is heavy enough so he gets away with the syrup. I dig the tune! We get some pure Pop with “Like You”. It’s in a faster pace and it’s neither cheesy or light-weight but still Pop, not Rock. But who cares when we get more hooks than on a fisherman’s hat, memorable melodies and an über-catchy refrain. I think it’s brilliant! Robin Beck joins Magness in a duet in “Love Needs A Heart”, a big, bombastic AOR-ish arena rocker that comes in a mid-pace. The rhythm reminds me some of the U.S. remix of Whitesnake’s “Here I Go Again” but the musical style of the song goes in a 80’s Heart / Robin Beck style, which isn’t that strange as Beck co-wrote it with Magness. The tune comes with endless hit-potential and therefore it should be a single at some point. Bloody brilliant!

“Nobody But You” is a ballad where the verses are more stripped and based on acoustic guitars and laid-back but the refrain rises to power ballad occasion and is incredibly catchy. The tune also contains real – yes REAL – strings and a bagpipe. Fantastic. More power balladry comes our way with “Maybe”. It’s big and pompous and the kind that would have been all over MTV back in 1990. If it had, this album would probably have made Magness a household name for at least a few years and shipped this album platinum. I have a soft spot for well-written power ballads and this is one of those so I say thumbs up! Magness takes us back to the opening track, sound wise, with “Shout”, an uptempo, raunchy and tough Melodic Rock song with clear Hard Rock undertones. The guitars are put upfront in the mix and the beat is punchy, the chorus is catchy and very crowd-friendly so I think it will work very well live if he ever decide to tour. Great!

“Rain” is a slow, stripped down, acoustic guitar laden ballad with a dreamy vibe, kind of like John Lennon going AOR. But when the chorus comes along, the tune heavies up and sports an incredible hook, catchy as can be. The contrast between the two works brilliantly, very unpredictable. Awesome! “All Over My Mind” is more of a laid-back AOR rocker on a base of both acoustic and electric guitars. It’s got a good groove and a bombastic feel and lots of stellar harmonies – very much in the vein of Stadium Pop-Rock of the early 90’s. Very good. The album closes with “My Heart”, an extremely smooth, pink n’ fluffy Pop ballad not a far cry from what Chicago threw at us back in the mid 80’s. Fact is, the tune is so sugary it could cause diabetes and way too syrupy for me. I don’t hate it but it’s the only track that don’t cut it on this album.

First of all, this album came as a big surprise to me. Reading about the kind of artists Magness had worked with made me unsure of just what to expect here. Fact is, I thought I would get a full-blown AOR album here and even though it sure leans towards pure AOR, there are a lot of different styles on this record – like Melodic Rock, Arena Rock and both Hard Rock and Pop. But what I do like about it, no matter what you call the genre, is that the record rocks. There are lots of loud guitars, crunchy and edgy high in the mix, there are heavy drums, tough and groovy rhythms and a dynamic sound scape all over – and finally, the keyboards gets to stand back for guitars – more AOR and Melodic Rock albums should have that kind of production, if I was to decide. Great songs, great performances and a fat, in-your-face production makes for an awesome album – and that’s what we get here. An awesome album! I really have to check out Solo now!