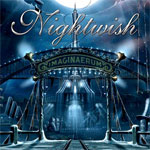 I bet that many wondered what would happen to Nightwish when their front woman, biggest asset and spokeswoman, lead vocalist Tarja Turunen was fired / left band some five years ago. To many thought Tarja WAS Nightwish and a lot of people wouldn’t put a dime on the band surviving that. But what did happen was that Tarja released two awful records that more or less bombed and Nightwish replaced her with Swedish singer Anette Olzon and released their best and most successful album to date, the great Dark Passion Play.

That happened in 2008. We now write 2012 and second album “Imaginaerum”, a grandiose piece of work that is not only an album, but that will also be a movie, in which all of the members will play a small part. Delusions of grandeur, anybody? Time will tell. Last time, Nightwish wanted to secure the following they had built up through the years and therefore the last album had all the usual elements and also the ”hittier” kind of songs. This time around, though, they have taken chances and recorded an album that is not that direct and the pop hits for radio aren’t anywhere to be found.

The first song on the album is an intro called ”Taikatilvi” and is sung in Finish, a brave move, as Finish isn’t the best language in the world to sing in!  ”Storytime” follows,the first single and yes, it is brilliant. It sounds like a mix between old Nightwish and ABBA and it’s very catchy and it should be a hit. ”Ghost River” is great. Heavy, angry, yet melodic and catchy and mixes both male and female vocals. In ”Slow, Love, Slow” they give us a jazz ballad. It shouldn’t really work, but does so surprisingly well. You can actually picture Olzon in a smokey night club, sitting at a grand piano in an evening gown singing this tune.

They bring back the celtic sound of ”The Islander” from their previous CD on ”I Want My Tears Back”. It’s a great song that combines catchy melodies with heaviness. ”Scaretale” is another killer which sounds like a horror musical and somehow I’m thinking of a Dickens story here. ”Arabesque” is an Arabian sounding instrumental, quite beautiful, but somehow I can’t grasp it and it feels like a throwaway.

If you’re into Blackmore’s Night then the next ballad is for you. ”Turn Loose The Mermaids” could very well fit into a record with Ritchie Blackmore’s duo. ”Song Of Myself” is a 13 minute big, pompous, symphonic and heavy number, that musically isn’t a far cry from Dimmu Borgir’s catchier stuff of today. It’s a great song, however the ending of the song is spoken word and tells a long story which is a bit of an overkill. I’m not sure that is called for. Write down the story in the booklet instead. The title track that ends the album is, unfortunately a bit too pretentious. It’s a long, instrumental, symphonic piece that, again, is quite beautiful, but does nothing for me at all.

All in all, Nightwish has made a great second album with their latest singer. Anette is a great singer, not at all annoying like Tarja was and I prefer Anette over Tarja 24/7. Also her English has improved a lot since the last album. Nightwish’s Anette fronted albums are easily their best of their career and even though this album isn’t as hitty as the previous one, it is a bit of a grower. It has grown on me and I believe this is their best album so far.