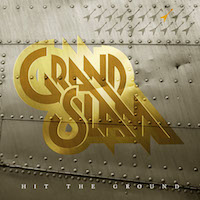 As a kid I just missed out on Thin Lizzy. Growing upp in the 70’s, Thin Lizzy was a band a never took any interest in, for reasons unknown. I became a fan in 1983, just as the news of their break-up came out. What a bummer. I followed Phil Lynott carefully after that though and after a decently successful solo tour, featuring John Sykes on guitar, Brian Downey on drums and Magnum keyboard player Mark Stanway, Sykes joined Whitesnake and Lynott, Downey and Stanway formed Grand Slam with new guitarists Doish Nagle and Laurence Archer (Stampede, UFO). But despite writing a whole bunch of really good songs and lots of playing live, the band never got signed due to Lynott’s escalating heroin abuse, which would later take his life. Still, when Grand Slam called it quits, Lynott, for some reason, managed to get himself a solo deal and a single – “19” – was released before it all was over on January 4 1986.