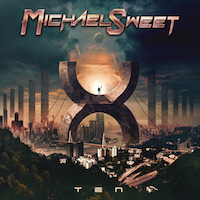 Michael Sweet is probably one of the hardest working musicians in the business right now. If there’s not a new album out by his main priority band Stryper, you can rest assured that there is or will be one out by either Sweet & Lynch or a solo album. What’s even more impressive is that he’s the main song-writer on all of those projects – and the quality is always amazingly high. The guy is a song writing machine – the song production from Michael seems to be without limits, there have been lo less than eleven records coming out from Sweet the last ten years, including the new solo album. Impressive to say the least, in a time when three, four years between albums is the norm. Since the music from Sweet’s different constellations have been so strong, I do expect a whole lot from him when a new album is due for release. His new record also sports some very interesting – and in some cases surprising – guests which makes the album even more intriguing.