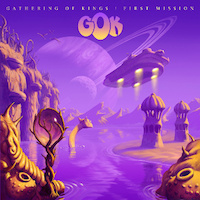 First of all, Gathering Of Kings are not a band, it’s a project. That said, the fact that they’re booked to play Sweden Rock Festival in 2019 might say that the project will turn into a real band in the future. Time will tell. GoK is the brainchild of one Ron Dahlgren together with his wife Nina (hence the RN Records moniker) who wanted to put together an A-list of Swedish Hard Rock musicians and make an album clearly influenced by how Phenomena was put together. Ron Dahlgren, the Tom Galley of Sweden? The whole thing has been in the making for a year and on January 25, it was time to show the result of some really hard work that has been going on for a year or so. But first a little presentation of the people involved here, an impressing number of 22 participants, from organisers, cover-art artists to producers and musicians.